At the Lynx, on the Arabic Creativity Stage, the most impactful presentation I attended in 2018, came from TBWA’s Saudi Branch. Omar Al Abdali – the CEO and Loui Kofiah – the CD, had an enchanting plea for the work culture. Codes – as in knight codes – not rules, are what make a great organization tick, they said. Interior design and architecture references plus people stories – both to hire and let go – blended in naturally, in a vivid talk that energized the audience. The openness, the wisdom, the refinement of the visual language, the humor – there you have it –  enough reasons to approach them for an interview to be featured in  my #LoveAndLobby, the anti-cliché, culture & creativity series around the world. Should I mention a bunch of awards won by their team at the 2018 Lynx competition? Nope, you will find more in the conversation below. So here we go, a double interview on experiments, the sparks that ignite an idea, on local flavor, contemporary Saudi vibes, enchanting places to discover and how this gifted team and their partners are delivering performance beyond borders, on every day basis. OMAR: My kid and my wife. My kid is 2 years old, it’s a fun age to be around, so when I talk to him and hear him speaking his mind, that’s the most joyful moment.

LOUI: 8am everyday. Every new 8am could lead into a different 11pm.

OMAR: My sister used to record Egyptian TV ads because of their music, and she used to make us watch them all the time. 30 years ago Egyptian ads were very musical. I got bit with the advertising virus, so, in a way, I’m the collateral victim.

LOUI: In Saudi, the public schooling system, at least at a young age, required students to make visual aids for science and math, and they would be hung around the classroom. For many of the tasks, students had to go to an illustrator and get their work done professionally. At the beginning I was kind of lazy, so I like the thought of paying someone to do it. I asked my mom for the money, but she suggested why not experiment and do it ourselves, and we agreed that I can actually make some extra cash if I start doing it myself. My mom was a flight attendant with a passion for watercolors and drawing life-like paintings of objects. So, she was both my painting teacher, and my first ever client that commissioned me for work. That’s my beginning in the visual arts, which took me into communication and advertising at a later age. OMAR: Ideas can come in the weirdest places, but people will always be the right creative quality check. If you have the right people around you, they will be able to see the potential, help you in judging those ideas by whatever merit, and enable you to make a better decision. So, it’s not just about where, it’s also about whom. The weirdest place I have got an idea – a lobby. We were working for Souq Okaz, a 2000-year-old event that still takes place until today. The idea came in the taxi, after the meeting was already finished.

LOUI: One of our recent campaigns started on a whatsapp group. Go figure. So, Omar is right, the idea can come from anywhere. Be it lavish places or even elevators. But, most importantly, it’s all about the people you’re thinking with. OMAR: A campaign for cooking oil, Mazola. The idea came by chance, we shot and we sold the idea a year later. Everything started from a silly perspective and ended up being the most appraised one.

We did the ad, and although the idea had potential, the production team and acting didn’t deliver the intended results. It came out very cliché, to the extent that we were making fun of it internally. However, we decided to take that into action, and we asked one of the content creators in our sister-company to make fun of the ad. And, believe it or not, the ad became famous for being bad. And thus, Crazy Grandma was born.

Many years later, we met with the client again, and we wanted to test if they’ll agree to give Crazy Grandma an encore. To our surprise, they agreed with no objections whatsoever.

Parody of the Ad:

LOUI: Back in 2010, I worked on a very rough art experiment called DisObedience. It’s about a notebook with only 4 written pages, while the rest are blank. It plays around with conformity in public spaces, and tests if people will do the instructions or not. I use to put this notebook next to a pen and a half-full coffee cup in art galleries, airports, cafes and to collect them after a while in case they were left. The whole point of the experiment is to show that rules are man-made, as dead characters in history wrote the instructions. The first 4 pages instructed people not to take the notebook and not to complete the blank ones, yet people ended filling them up with all sorts of random stuff. 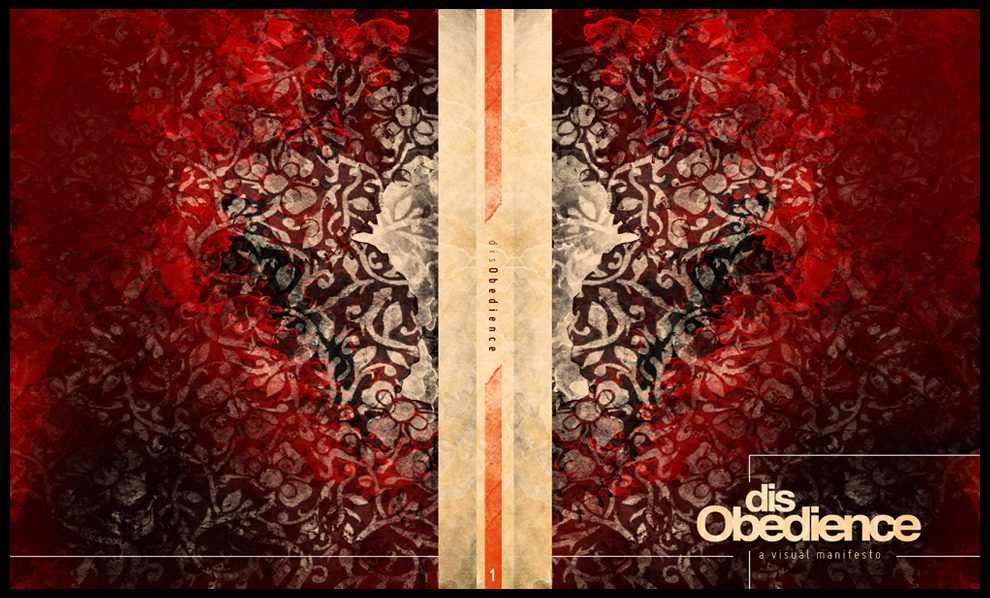 LOUI: We worked on a pre-Ramadan campaign for STC. The ad wasn’t a fun experience, but we had more fun creating promotional content, including GIFs to be sent as greetings. It became viral almost instantly, and I ended up receiving it from different people, which felt very weird.

LOUI – the limitations. It forces you to come up with an idea that is completely new, without submitting to cultural norms that change because of you or in despite of you.

People say Saudi is not a good market for advertisements or the audience are hard to crack or whatever excuse that suites them not doing actual relevant work. We have 13 years to prove otherwise. We take every single project because it has limitations. For us, they’re not a stopping point, but a starting point to being forced to overcome them. OMAR: The Saudi humor it surprising, and totally unexpected.

LOUI: You know it is pure Saudi insights and references because it can make you laugh from the bottom of your heart. Something of our culture we can export, the same way western humor lives with us. And Saudis are probably the weirdest breed of sarcastic creatures you can ever come across. We provoke with comedy, we argue in comedy and we fight with comedy.

A religious man was asking this guy to lower the music, and he said “But this is the best part…”. The religious guy insisted on giving him advice, and then this happened:

OMAR: I wish them good luck.

LOUI – They would be surprised by their quality of work, if they manage to look in all the genuine places, not just the expected ones. I was an architect before I joined advertising. What I can tell them, is look for potential more than portfolios, but portfolios help too, haha -). LOUI: In Jeddah, for me, it’s definitely the departure lounge in the north terminal (foreign airlines). You get to see the culture shock, and culture change of outfits, right in front of you. You get to see people smiling because they’re travelling and sad because of the same reason. Both Saudis and each type has a backstory behind that smile or frown. It’s fun to guess while I used to hangout in the café inside the airport.

In Riyadh –it’s the desert area, indeed. When we were in college, we were broke most of the time, so instead of going to Bahrain to party, we were going to the desert. We used to hack our way into connecting the PlayStation to the car battery through a generator of sorts and we were playing like crazy until the middle of the night. It’s not the point of the desert camping, and we thought it’s the suitable paradox to do so.

LOUI- Sudah, one of the highest mountain peaks in Saudi. Having a picnic with the clouds below you gives you this feeling that you are on the top of the world.

There is also the Wa’ba crater. From the right location, on the full moon of every month, the white light makes it look like the surface of the moon. OMAR: We have been judged by how the media portrays us. Jeddah, for example, is a hub for the old Islamic religion and those people are incredibly kind. It’s also a boiling plate of 12 different cultures; it used to be a trade city before Islam, and many resided there all their lives even before Saudi was born.

In Riyadh, you have the opposite, a desert region that is tough, very traditional and relies on hospitality for it’s social bonds as it takes people in from the hot weather. And when you go there now, only the traditions remained, as it became the most metropolitan city in the whole kingdom.

LOUI: We wear geeky t-shirts and jeans more often than you think. 12.Saudi Arabia should be known for:

OMAR: Its people. Take twitter as an example; Saudis keep making the first top hashtags trends globally, just because they are having fun joking around.

LOUI: There is this concept of “Faz’a” – a call to action to help anyone who says it. When you use it, like I want you to help me, and you use that sentence, it’s like a way more serious call for help than simply shouting “Help”. Omar’s journey started 12 years ago as he made the switch from the client side (working in Unilever, Toyota ALJ, Savola) to TBWA\Fullstop. He worked on various campaigns covering different functions in the agency like planning, client services and even creative ideation. He held different administrative responsibilities while growing within the company from an account manager to finally heading the agency as CEO in 2017. Throughout his experience, Omar worked with major clients on various sectors that influenced many achievements and creative awards for TBWA\Fullstop. Omar holds a MSc of Entrepreneurship & business from University of Glasgow in UK. Lou is an illustrator, a graphic designer, a mad scientist of sorts, and all-around-gamer, with 10 years experience in the Saudi market, along with various online collaborations and art projects. Lou enjoys experimenting with ideas with a design-centric approach to solutions, and has an engineer’s focus on details (no, not an OCD). He likes long walks at the beach and collecting stamps.

A material written by Teodora Migdalovici

Teodora Migdalovici is a public speaker & trainer on creativity. For the past 18 years, the people she worked with, from young lions to established professionals, ended up winning Lions in Cannes.

She is a creativity and diversity advocate. Fighting stereotypes about Romania, in 2016 she launched #LadiesFirst, in order to promote Romanian talent in all shapes and sizes at major communication events worldwide. The idea turned into a premium magazine about culture, gender and national identity beyond media clichés, enchanted the global ad community at Eurobest, Cannes and Dubai Lynx.

Under the private diplomacy platform #Love&Lobby and #LadiesFirstMENA, she is currently mapping the creativity, gender and culture scene in Middle East, looking beyond the mainstream Western media clichés, in order to deliver a first hand, unbiased report about the valuable contribution this diverse region has to offer to the world.