The Switzerland-born activist and artist Annina Rüst creates socially motivated objects that raise eyebrows and generate worldwide conversations on contemporary topics. The gender gap is one of them.

Which are her tools? An interesting mixture between tech, programming and everyday items such as an ordinary cake – that became a new medium, speaking loudly via discriminatory pie charts. As the creator of the first social dessert in the world, she fights against the gender discrimination since 2013, by depicting it on edible pies.

Her installation of the digitally projected gender pies, firstly presented in Stadtgalerie Bern and then and then awarded an Art+Tech grant by LACMA, is not only a “delicious” protest for feminism, but one for collaboration and equality as a work ethic that transcends gender barriers.

Her tech art, converted in a social message on food, was praised by The Huffington Post, Wired and New York Times Magazine. 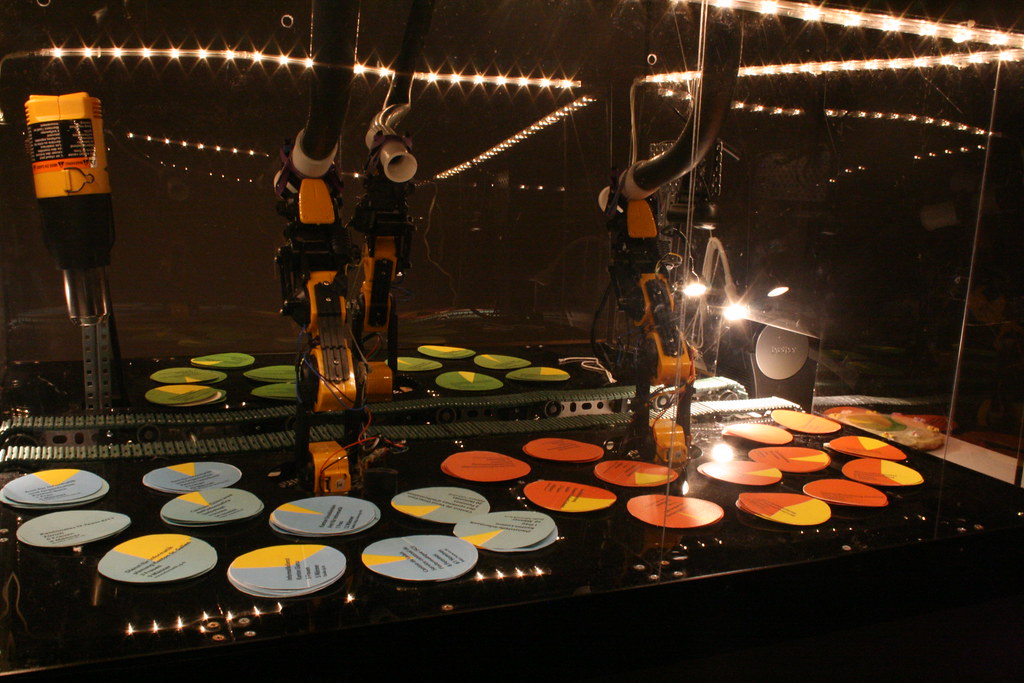 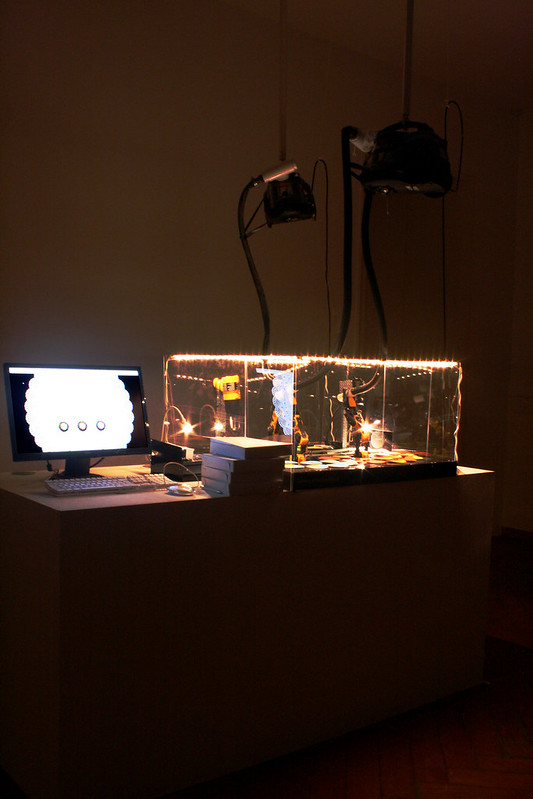 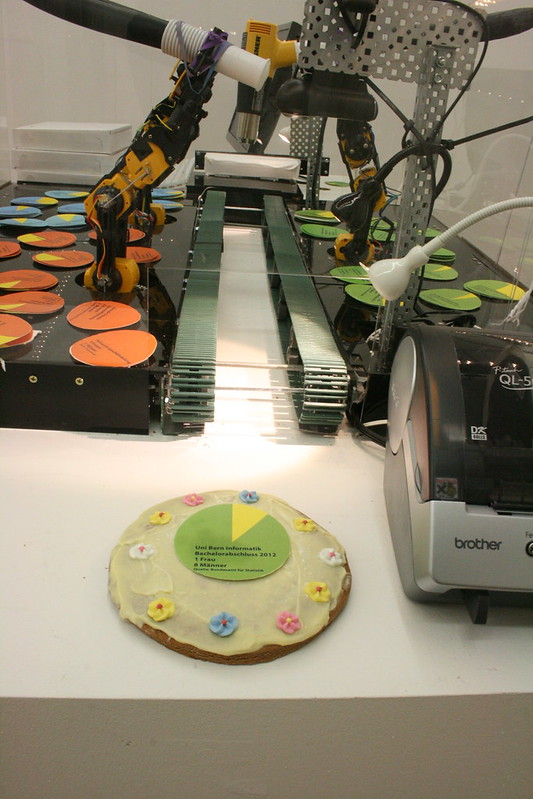 AdHugger: What was the story behind the “gender gap pies”? How the idea flourished? What was its background?

Annina Rüst: I have a history of using food and robotics to visualize data: Back in 2006, I made a rice cooking apparatus that is connected to the Internet and reacts to news about genetically modified rice by adding genetically modified rice to a rice cooker. When there is enough rice in the cooker for a meal, the cooker automatically cooks the rice and then sends out emails to people to come eat the rice. The project was called eRiceCooker.

In 2012, I started working on “A Piece of the Pie Chart”. It’s a feminist food robot that visualizes the gender gap in art and tech workplaces on edible pies. The robot is an interactive gallery installation that is inspired by industrial production lines.

I had been searching for an effective way to visualize the gender gap in technology and art.  I had been collecting gender ratios from technology events for a while but had not found a good way of visualizing the data until I had the idea to visualize it on the pies and started building a robot to achieve this.

What is specific about my project is that I created a robot that includes instructions and packaging materials so that gallery visitors can package the pies and send them to the places where the pies originated (tech companies, art venues). However, if gallery visitors do not want to send their pies, they can instead take them to their own workplaces to discuss gender and economics with their colleagues. As part of the process, the pies are photographed and published on Twitter.

AdH: Where did you presented first the idea and what was the aim of this powerful visual statement?

A.R.: I exhibited the first version of a Piece of the Pie Chart in 2013 at Stadtgalerie Bern (Switzerland). The news coverage of that exhibition was relatively sparse. However, I then got a grant from the Art+Technology Lab at the Los Angeles County Museum of Art (LACMA) in early April 2014. The museum has a great PR department and they got coverage for my project on the New York Times, Artsbeat blog, the Huffington Post, The Creator’s Project. Those are media outlets that have a large, worldwide readership.

About the visual statement: The pies are a data visualization that cannot be passively consumed. They are a multisensory symbol to show how women fare in the art and tech industries. Gender (especially in the tech industry) is a divisive topic. The pies are therefore a medium of protest that is “sweet”, humorous, seemingly non-threatening. The robot is part of this seemingly playful performative style of presentation. The robot performs for the audience in the exhibition. This type of performative, humorous data visualization style is common to feminist activism going back to the 1970s and 1980s and possibly before. My primary aim in the project was to feminist protest to include robotics. The pies are symbols of domestic labor, something often ascribed to women. So the idea was to create a rebellious food robot with gender gap pies as the output.

AdH: Tell us more about the way this project evolved in time.

A.R.: I created several versions of the robot and exhibited them between 2013-2015. One exhibition happened at Haus der Elektronischen Künste in Basel and another one at the LACMA Art+Tech Lab. in early 2014, I also created an online tool for making pie-based visualizations. I exhibited it the following fall in a small exhibition at Syracuse University, where I teach.

AdH: What was the audience’s reaction ?

A.R.: The reaction was generally positive. The organizers of the LACMA Art+Tech lab said that the audience for events involving the project in April 2015 had vastly more women in the audience compared to other events they had organized.

I have not received a lot of responses from companies, universities, and art venues that I criticized through the project. Some asked how I collected the data. Others, like the University of Fribourg, who received a pie through Twitter during the exhibition in Switzerland, disseminated the image of “their” pie to their Twitter followers even though the gender ratio of their computer science graduates far from impressive.

AdH: Which were the changes this digital and activist art project managed to generate at the society level?

AdH: What is the role art has to play when about the evolution of society?

AdH: What should be the relationship between art, activism, brands and society?

AdH: What should be the relationship between art, activism, brands and society?

A.R.: My feminist activist art work comes from personal experience and from experiences of women before me. Part of the feminist ethic is to collaborate, treat everyone as equals, and therefore not to exploit others. Nowadays, feminism is trendy and has become attractive as a marketing tool. I am excited that charities, brands, and companies are embracing feminism – as long as they adhere to feminist ethics.

You have probably heard the story of the t-shirt that says “This is what a feminist looks like”. It turned out to be produced in a sweatshop-style environment in Mauritius, where women garment workers are exploited. That was a PR disaster for the charity that sold the t-shirt because they had clearly committed a feminist ethics violation.

The goal of feminism is gender equality. This is a simple goal but the above example shows how difficult it is to achieve.

Her projects happen at the intersection of activism, algorithm, data, electricity, humor, politics and pop culture. Her work has been reviewed in such publications as Wired and the New York Times Magazine.

Rüst’s projects have been shown internationally in galleries, museums, and festivals such as Zero1 Biennial and ISEA, as well as at the Edith Russ Haus for Media Art in Oldenburg, Germany.

In 2014, she received an Art+Technology Lab grant from the Los Angeles County Museum of Art (LACMA).

Since 2009, Annina Rüst has worked at Syracuse University in the Department of Transmedia. She is a tenured Associate Professor.