Skip to content
On the occasion of the Flemish Community Day, mortierbrigade and NGO for refugees’ rights “Vluchtelingenwerk Vlaanderen” recycled the Belgian extreme right-wing party election posters into printed portraits of refugees. On these, Vlaams Belang’s slogan “Our people first” has been revisited as “Our people too”. The giant posters are displayed on the facade of the Beursschouwburg, in the heart of Brussels. 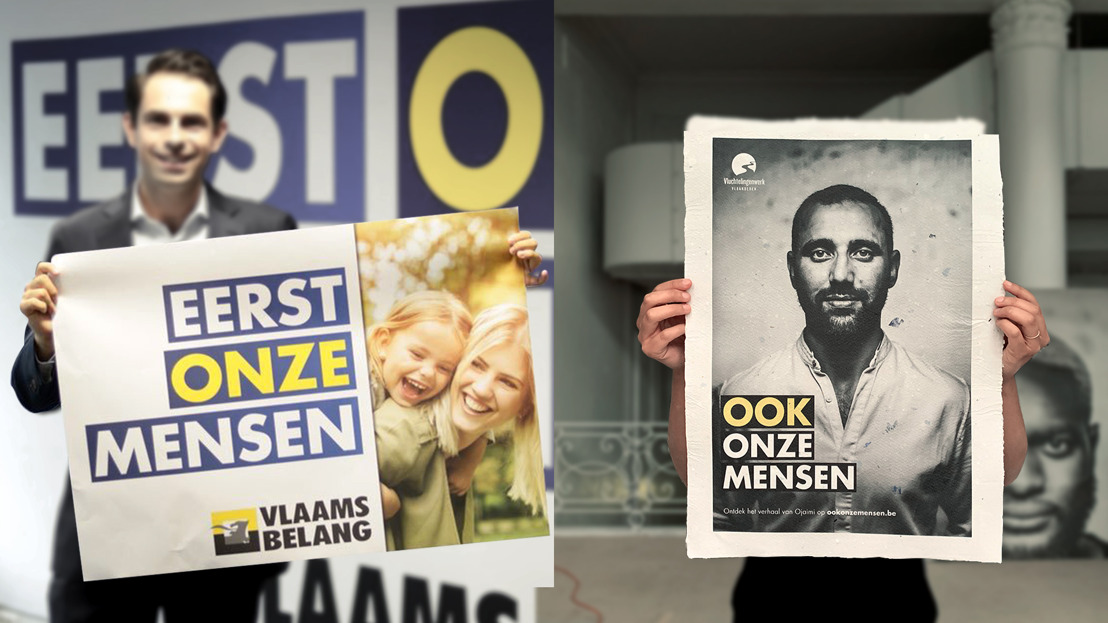 Following the Belgian elections last May, a part of Flanders did not show its most welcoming side, preferring a closed community to a tolerant and open one. For NGO Vluchtelingenwerk Vlaanderen, that defends refugees’ rights, mortierbrigade draw attention to the importance of tolerance and integration of refugees in the Flanders of tomorrow. The agency collected Belgian extreme right-wing party Vlaams Belang’s election posters after the elections and turned a negative message that excludes a large part of the population into a positive story.

Flanders is a community in which everyone should feel good. Yet, it tells a story of exclusion that leaves no place for multiculturality. At Vluchtelingenwerk Vlaanderen, we want a warm and inclusive community, in which there is also room for newcomers. For people who are looking for a place to feel safe, and to move together towards a more open and tolerant society. In this modern Flanders, we do not say ‘our people first’ but we say, ‘our people too’.

On the website ookonzemensen.be, people can listen to podcasts from the portrayed people. Stories to listen to, but also to read as they are narrated through mean tweets. Each word used to tell the story refers to a tweet with an intolerant or racist character. A way to show how imprinted with hate these stories are and to turn a negative message into a message of hope.

This campaign is the result of a collaboration between mortierbrigade and NGO Vluchtelingen Vlaanderen, with the participation of sound studio RayGun and the design architects of Milk&Cookies.