Brandient created Brio, the first national platform that evaluates the performance stage of Romanian students through standardized testing, launched on June 1st with the declared intention of generating relevant change in the Romanian education system — for parents and children, as well as for school principals and teachers.

The project’s founder and Chief Scientist is Dragos Iliescu, PhD, the most renowned Romanian personality in the field of psychological testing and organisational psychology, President of the International Test Commission —with a significant contribution from his mentor and Brio co-founder Professor Emeritus Thomas Oakland (1939-2015), widely known as one of the fathers of standardized testing.

Brandient became a partner in charge with the brand creation for this high stake education project, a real game changer for the Romanian transformative society — with the mission of supporting the creation of a new category on the educational services market.

Brio is an independent brand, with strong institutional character, conceptualised taking into account all required brand associations, and capable to deliver the solid, mandatory credibility of a category leader, while seducing the young target with easiness, approachability and coolness.

The visual identity was built around the eagle-and-pencil symbol that expresses two main points: firstly, the commitment to serve the educational field without compromise and secondly, the ability to have an elevated all-encompassing view of the whole educational landscape.

By all means, operating improvements would not be possible without accurate measurement. We have put tremendous effort into designing this evaluation system in such a manner that it ensures independent processing while offering solid data as a final outcome. 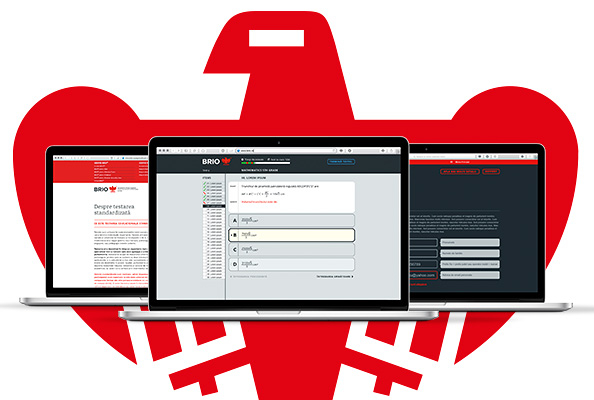 Brio is the result of four years of work by an excellent team of experts in psychometrics, IT and mathematics, led by Dragos Iliescu, PhD –  professor at the Faculty of Psychology and Educational Sciences, University of Bucharest and the founder of TestCentral (the editor of scientific psychological tests in Romania). Dragos is probably the most renowned Romanian personality in the field of psychological testing and organisational psychology, and President of the International Test Commission. The co-founder of Brio is Professor Emeritus Thomas Oakland (1939-2015), Dragos Iliescu’s mentor, widely known as one of the fathers of standardized testing.. Brio is endorsed by Gazeta Matematica, through the well-known professor Radu Gologan, the coordinator for the Romanian Olympic Team for the International Mathematics Olympiad.

Brandient is the award-winning brand strategy and design company, with offices in Bucharest and Singapore. Find out more about us and about our work.